From DVBViewer
Jump to: navigation, search 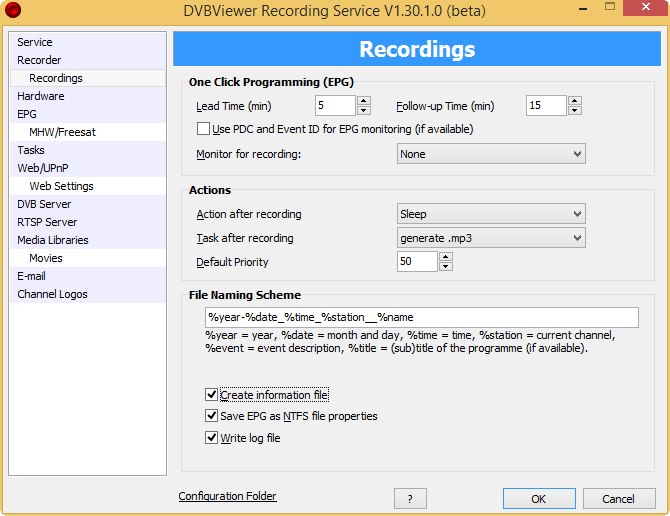 If you program timers with the EPG this value is subtracted from the start time of the timer (which lets the timer start xx minutes earlier).

If you program timers with the EPG this value is added to the end time of the timer.

Use PDC to monitor the EPG (if available)[edit]

The german public stations (and ORF, possibly SRG, too) are sending a PDC descriptor with a PIL (Program Identification Label) for each EPG entry. This PIL is unique and serves as identifier for an EPG entry (per sender EPG ID), even if the broadcasting time/duration is changed.

During setting a timer from web interface, the PIL is stored in the timer also. So the timer "knows" to which program/show it does belong. If the broadcasting time/duration is changed, the timer will adjust its data automatically to the new times. This works even during a recording when the duration is changed and the station reflects this in EPG. However only prolongation of the timer is supported, not shortening, to be on the safe side.

Assumptions for a working PDC:

This function siumulates the VPS function. The timer is started and stopped depending from certain data (EPG Running Status or VBI PDC signalling in Teletext).

Attention: Incorrect data can lead to defective recordings, when this function is activated.

Here you define the default values for programmed timers. You can adjust the settings for each timer individually in the timer edit window.

This the default recording action value used for every new created timer.

Tunes the channel at the given time. No data is written. This function is useful for Siehfern Info updates or selective EPG updates.

Sets the default action which is executed after a recording.

The DVBViewer Recording Service can create a wakeup timer for the modes "Standby" and "Hibernate", which wakes the PC at the given time. For the Power Off mode this is not possible.

Here you can program the default process task which will be run after each recording, if it wasn't changed on a per timer basis. You have to create the process tasks on the Task page. For further informations see also After recording tasks.

Here you define the default priority of new timers.

Here you set up how the file name of a recording is composed. Only use in a file name allowed chars.

You can use this variables which are replaced with the actual values:

You can use more than one sub folder. The sub folders are generated automatically. You can also use a predefined Folder name...

If this option is activated, the Recording Service creates for each recording a text file with the same name. This file contains the EPG Data and further informations regarding the recording.

Save EPG as File Info[edit]

The NTFS-Filesystem (Windows 2000/XP/Vista) can store additional informations for a file. If this options is enabled the recording service uses this to add the EPG data to a recording file. If you copy the recording onto a non NTFS drive (example: a DVD or a FAT32-Partition) you will loose the additional data. Editing (Demultiplexing, cutting) a recording will also remove this additional data, because most programs do not care about this data. To copy the data to the edited recording you can use the File Property Copier.

You can see the additional informations in the following places (for Vista32 you need to install the DVBViewer Recording Properties plugin, Vista64 users can not see the data):

If enabled the Recording Service creates a log-file for each recording and writes into it which DVB device was used, how high the average data rate was and if and when errors (Discontinuities) in the data stream occurred.